Four and a Half Minutes 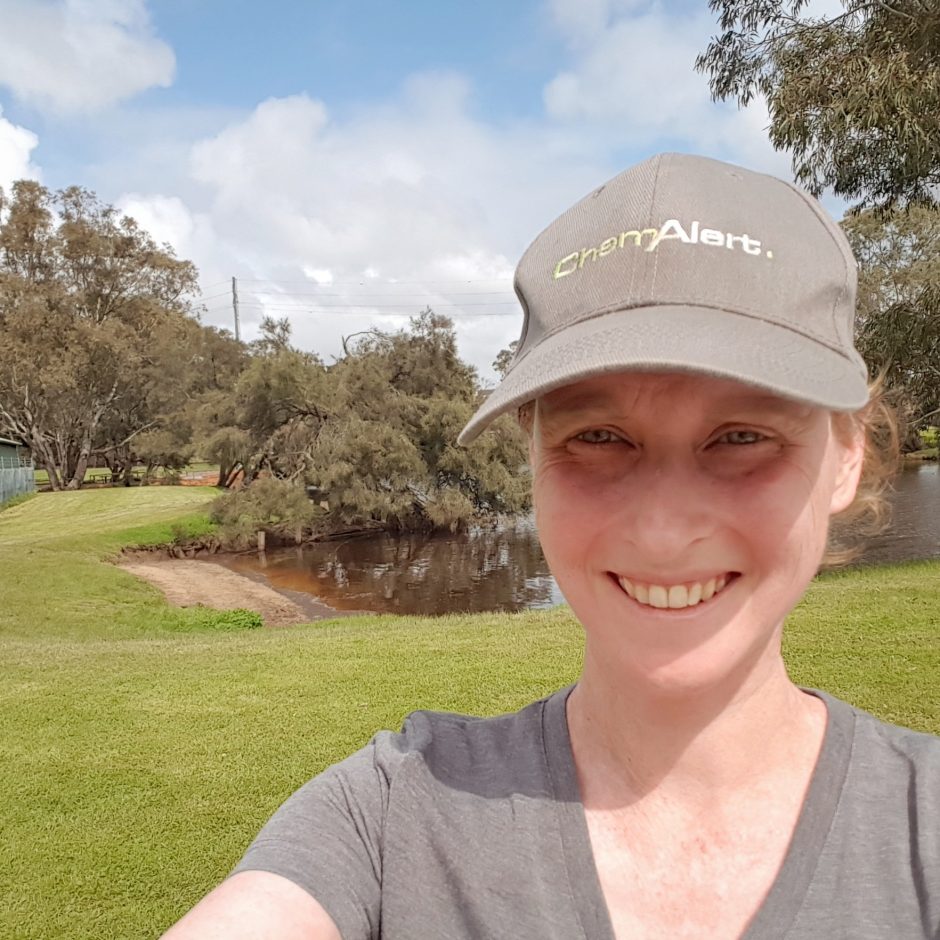 Saturday was due to start like most of my Saturday’s now. With a 6:45am alarm, followed by breakfast prior to heading down to parkrun for 7:45am. No more lazy Saturday mornings for me! But let’s be honest, with a toddler, lazy mornings are a thing of the past.

We had an evening out on Friday night, and EJ kept me awake for a while with her coughing, so I turned the alarm off and hoped for a sleep in instead of the run. Of course, come 7:30am, the beagle woke us in a panic, thinking that she was going to miss breakfast and be late for her post-breakfast nap on the couch. Beagle logic. You can’t beat it.

So up we got, and in the process, the munchkin woke up as well. After breakfast and the required digestion phase, I hit the parkrun course all alone. It was cloudy when I started but the weather didn’t seem too bad. Usually going into a run, I have a plan. I have alerts set on my watch telling me when I should be running, how long for, and when I need to have a recovery period (e.g. walk). With me only starting out, and having to keep a close eye on my heart rate, I have been somewhat playing it safe. On Saturday though, I threw it all out the window.

Parkrun is a great idea. Taking people from all walks of life, all levels of fitness, and throw them together to run/jog/walk/push prams for 5km. It really is good. But every time I have gone, I have felt a sense of pressure. I see the 100 people ahead of me. I turn and see not many people behind me. I feel like I need to speed up. I lose out to mind games.

I was determined on Saturday. My pace, my race. Just me, my trusty headphones and a good playlist, and my brain set to ‘focus’ mode. I told myself continuously that I have been through harder, I have felt a hell of a lot more pain than just a run. I thought of warriors. People I respect, people who are strong. And then ultimately, I thought of nothing. I thought of the beats playing in my headphones, and I switched off. My watch buzzed after 1km to let me know I had broken my previous 1km record. I felt good. I reached about 2km and it started raining. Just light rain. That was fine. It was actually quite pleasant. By 2.5km it started to get heavier. But I was halfway. I knew that at 3km there was a small gazebo where I would be able to shelter. So I pushed on. 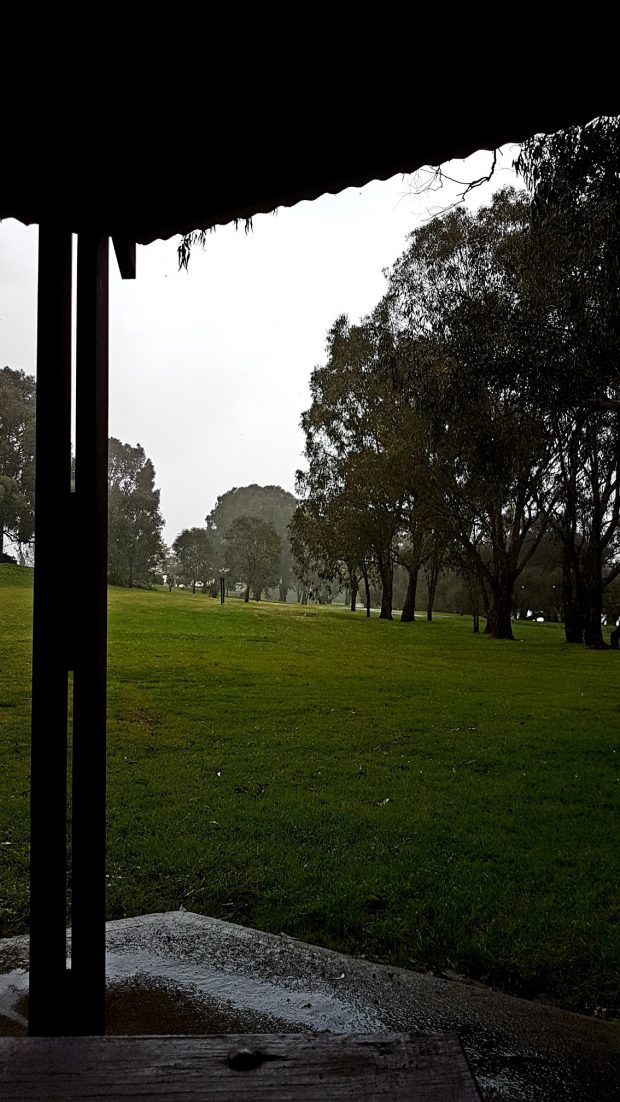 By the time I made it to the gazebo, it was bucketing down. I was drenched! I sat. I caught my breath, I waited a few minutes, and the rain eased. It was still raining but I was determined. I had so far been on track for my fastest finish. I needed to push on as quickly as I could. If I waited too long, I would not feel as if I completed the 5km in one go.

So, after about 3 minutes, with the rain slowing, I continued to run. By 4km, the sun was out, it was warm and I felt great. I kept checking my watch and my pace was good.

I finished the 5km and checked the time. I had beat my previous PB by just over 4 and a half minutes.

I was elated. I was exhausted. I was wet, and hot, and sweaty. But damn I felt good. I see why they talk of the runner’s rush. All those endorphins were pulsing around.

The rest of the weekend hasn’t quite felt as good. The downside to chronic illnesses is no matter how good you feel one minute, the next you can be crippled. I woke up today in a bit of a daze. My usual leg pains had kept me awake a bit during the night. But I pushed on, and by lunch time I felt ok. By mid afternoon though, the muscle spasms had hit though. My hands, my forearms, my legs, and my diaphragm started taking turns to cramp and seize. Then they decided they might as well all join forces and see how many muscles could spasm at once. It hasn’t been a fun evening. Queue a series of hot showers, hot packs, an Epsom salt bath, and a truck load of me telling my body to stop messing with me and I think I may be winning. The pictures don’t quite show how bad my hands looked … but this was me attempting to hold them flat and straight. 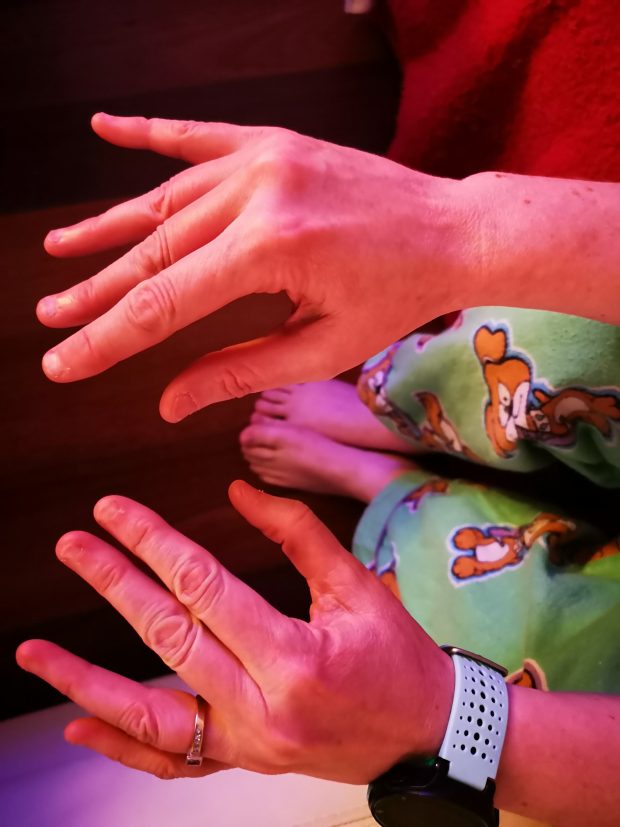 I guess it shows, that no matter how good I feel running, I still have to remember to pace myself. This weekend was great, and showed me I can run faster than I thought I could. But also, I need to remember that my body isn’t like a normal person. My goal that I have set myself is a huge one. The pace that I need to run at, is an impressive feat for a normal person, let alone someone with lung damage, heart damage, and all the other damage that chemotherapy, radiation and graft v host has thrown into the mix.

But tonight, I sit here, typing mainly with one hand. Having a cup of tea, and feeling proud. Cos dammit, I did it. Four and a half minutes.