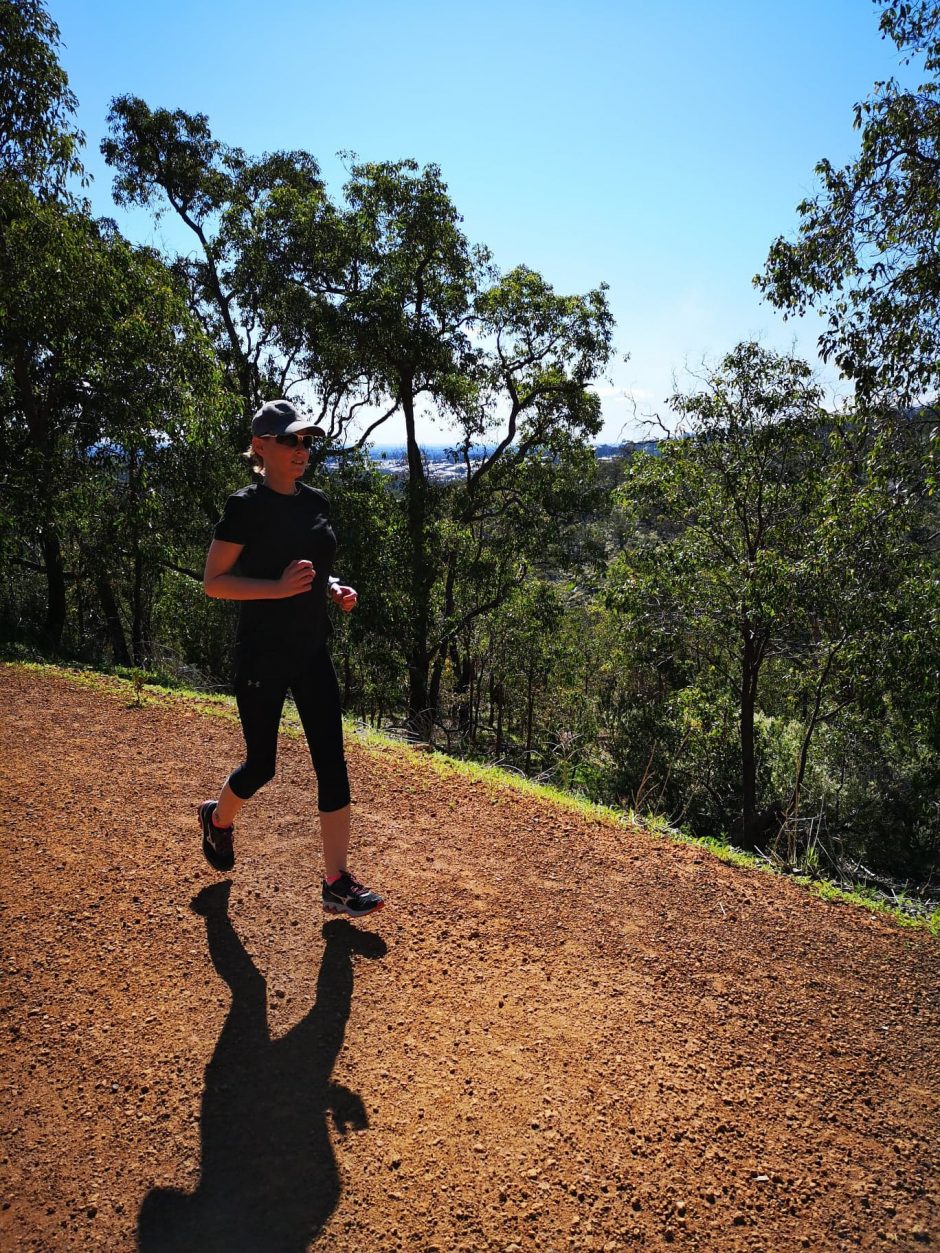 Sunday has to be my favourite day of the week. Sunday is rest and recovery day, so no exercise allowed! Woohoo! After 3 days of running and 3 days at the gym, I definitely feel like I need that day off. In saying that, this week (and last) havent gone quite according to plan with training.

One thing that they don’t tell you when you have a bone marrow (stem cell) transplant is that the rest of your life will be affected and you will live with chronic illness/problems. They tell you that you will hopefully be in remission, but it isnt guaranteed. But if you dont have the transplant then you will more than likely not be alive in a few years time. When I had my transplant, it was a really difficult decision. There were a few drugs that showed promise, however they werent available in Australia. I had to make the decision to have the transplant, or go to Europe and spend about $300,000 for a drug that may not work anyway. But that is a topic for another day.

They mention graft v host disease (gvhd). They say that it can be very serious. But by this point in cancer treatment, you are already so scared that you have almost become complacent with potentially life-threatening circumstances. They say that you want a little bit of graft v host, as it will also then work as graft v cancer. What they dont tell you is that graft v host will cause not ‘serious’ issues, but more frustrating than anything. My graft v host usually manifests as a grumbly liver and a skin rash. When Erica was born, I added ocular gvhd to the list, and now my eyes no longer produce adequate tears, so I rely on eye drops. But I digress.

A few weeks ago I went to the doctors for a checkup, and to see if I could continue to wean the immunosuppressants I have been on since Erica’s birth 2 years ago. Unforunately, my liver had become grumbly again. Nothing to be concerned about but it meant that the immunosuppressants had to be increased rather than decreased. For immunosuppression over the years I have mainly used prednisolone, a steroid. I have been one it for more time that I have been off it over the past almost 6 years. Each time I go back on to them though, my body tolerates it less and less. So this time, we tried to keep the prednisolone dosage as low as possible and rely on cyclosporin. I cope better on cyclosporin. My kidneys dont like it, but it is more easily tolerated from a lifestyle point of view.

For years, when I have been on the steroids, I have been plagued by muscle spasms. They are like cramps, but affect nearly all muscles, some all at once, some limited to particular areas (eg. hands). We havent been able to work out if it is a case of having gvhd present in the muscles causing the pain and cramping, or if it is the steroids. After almost 6 years, I *think* it is the steroids rather than gvhd.

So, going back to what I was originally saying, the doctors recommended putting up the steroid and cyclosporin dose. It started ok, but after a few days, the pains started, along with the muscle spasms. I usually get them at night. The muscle contracts and it is like the worst cramp you have experienced. Often in my calf and foot at the same time. The contraction turns my leg into a deformed lumpy mass as different parts of the muscle spasm at different rates. And unlike cramps, you cant stretch them away. I just have to wait them out. After 5 or 10 minutes, the cramp subsides, but the pain stays. It is a hard to describe pain. Deep bone pain, with a hint of nerve. Eventually that settles, and I can fall asleep for 30 or 40 minutes until the next wave hits. For almost a week, this was my life. I would get up, exhausted, but wide awake. My body would feel heavy and tired, so I skipped the gym. My muscles were getting enough of a workout. Off to work I would go. I still tried to keep up with the running. Moving helps.

Throughout the workday, the pain would start up again. By early afternoon, most of my legs were cramping again, then my hands would start. The end of the workday would come and I would hobble home to face another night of pain. Hot baths and showers help, so I would use them as much as possible for relief in the evening, hoping I would fall asleep and not have as much pain that night.

After a week of this, I couldnt take it any more. I wasnt sleeping, I couldnt walk let alone think about training. Looking after myself was hard enough, let alone my family as well. So off I took myself to the hospital where I refused to leave until the dosage was reduced to a manageable level. That was a week and a half ago now, and whilst I still have been getting pain each night, it is definitely easier to deal with. I was able to go to the gym on Wednesday night for PT, had a massage on Thursday to try and get rid of some of the tightness, and went for a walk on Friday.

For Saturday’s run, I skipped the parkrun as Scott was working, and we thought we would all head out to the National Park for a spot of trail runnning. I have never run on gravel before and boy is it a different beast. Scott and Erica came along as support crew on bike and in chariot, and I thought, this will be easy, I will just do some interval running and we will be able to do 7or 8 kilometres nice and easy. Unfortunately my body was against me a little, and my heart rate was showing by the 3km mark that about 5km was going to be my limit for the day. 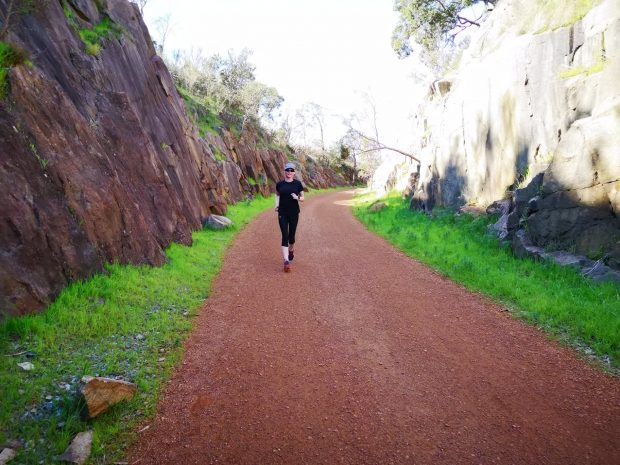 It has taken a long time to get comfortable with exercising and having my heart rate rise. After all the chemo, I was left with chemotherapy-induced arrythmia and tachycardia (a fast rate with abnormal ‘extra’ beats). I would start exercising, and my heart rate would rise, 160, 170, 180 .. ok that is getting a little high .. then within seconds it would be upwards of 200, 220. Then tunnel vision set in and I had a few seconds of wooziness and needed to sit down before I fainted. Getting back into exercise now, I have to wear a heart rate monitor at all times. The beeper goes off at 180bpm. It went off many times yesterday on the run, telling me to back off a little. I havent had it hit 200 yet, but it is still a psychological battle, telling myself that it is okay for it to be a little high. That it wont continue to race. After 40 minutes, Erica decided that chariots weren’t her thing and she wanted to walk alongside. My pace on the last kilometre, needless to say was very slow as we stopped to say hello to rocks, ants, leaves, have kisses. At least we know now after the couple of outings we have had with the bike that her patience for sitting is capped at about 40 mins. 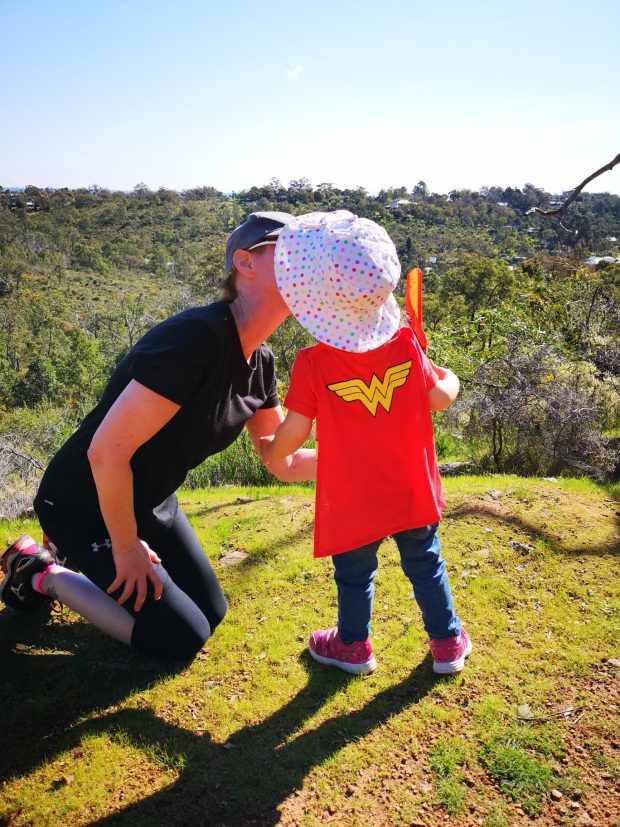 My goal for this week coming, 3 strength training sessions at the gym, 2 interval run sesssions at work, and then Saturday parkrun (5km).

A huge thank you to those who have already donated to MUDBlood Running via the ‘Donate’ link. Any donation above $2 is tax deductible (click ‘Other’ to select a value other than the listed amounts) and goes directly towards my training, then flight and accommodation for the Games. The more money raised, the more training I can undertake, so my aim is to raise as much as I can as quickly as possible to get the training in early. So please, if you can, show your support, and also share with friends/family/co-workers.